The Khyber Pakhtunkhwa Information Minister Shaukat Yousafzai recently gave a bizarre statement in a Press conference saying doctors and engineers used to sell pakoray in Khyber Bazar before the PTI government came in power. People weren’t quite expecting such impudent comment coming from a public figure like him. The video clip soon started surfacing the local internet and ignited heated conversations on social media.

In a society where more than half of the professionals are either doctors or engineers, such disparaging remarks came out entirely offensive to most people. People strongly condemned such a belittling remark from him and demanded his public apology immediately.

@SAYousafzaiPTI has no right to disgrace a noble profession, Engineering. You owe us an apology. Your choice of words disrespected us in every possible way. I request the worthy PM @ImranKhanPTI to take a strict action towards the misuse of language. #SaySorryToEngineers

And how could Pakistanis miss the chance for trolls? They trolled him back by LITERALLY celebrating Pakora day

One from the archives before my MBBS degree. Massive Throwback. Thank you Shaukat Yousafzai for giving me new life.#Tbt pic.twitter.com/xoIip49hxj

Earlier this year, Shaukat Yousafzai, the then KPK minister for health, conducted a press conference to have a detailed discussion about a few sensitive issues like population planning.

The video clips and screenshots of the session surfaced on the internet and had a Snapchat cat filter on them. Here’s the video:

This joker can’t humiliate engineers: it’s he himself and his party that he humiliated.#SaySorryToEngineers pic.twitter.com/nJJsZitwh4

The remarks not only offended Doctors engineers but discriminated actual pakora sellers too; and people were here to raise voice for them

Besides Doctors and Engineers, the professional vendors who quite literally sell samosas and pakoras for their livelihood also deserve to be addressed respectfully.

People were quick to realize the fact that these hard-workers were far better because of their mehnat and their professionalism shouldn’t be demeaned. 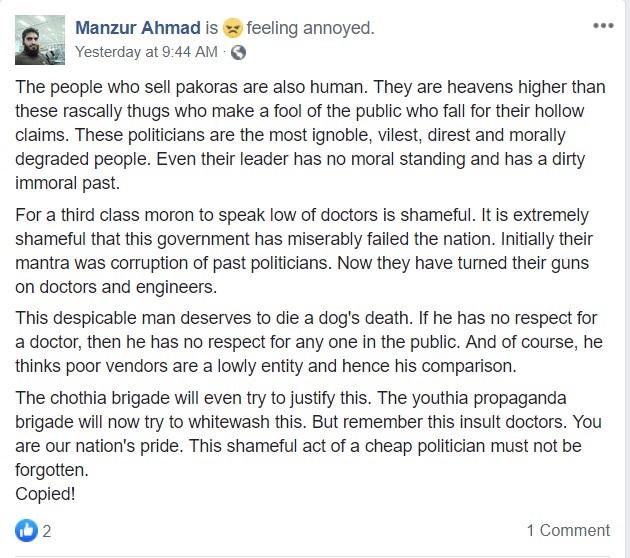 The comments by Mr. Yousafzai faced a lot of criticism from doctors to engineers and even people from other professions who channeled their anger into a celebration.

Public officials are the ones who are the most prone to criticism. They should be more considerate and careful about what they share with their audience and choose their words carefully.

Will you be celebrating the pakora day too? What do you think about the whole fiasco? Let us know everything in the comments below.