The 24 year old weightlifter claims he has already rejected up to 300 proposals from women wanting to be his bride because they were too small, and now hopes to find his perfect ‘heavyweight’ match.

Towering over six feet, Khan Baba said his ideal partner would need to have a height of at least 6ft 4in so they both can ‘look right together’ as a couple. Khan, who is a 70-stone weightlifter says he would consider any woman less than 16 stone in case he crushes them. Her bride would also need to have a ‘bulky frame’ to avoid being squashed.

You can learn more about Khan Baba’s fitness routine below:

Besides the required physical appearance, Khan Baba said his ideal partner would also have to be a great cook to cater for his 10,000 calorie-a-day diet, which includes four chickens and 36 eggs. He also eats thee kilograms of meat and multiple bowls of rice, fruit and bread, washed down with 5 litres of milk each day.

Despite the large amount of food he consumes on a daily basis, Khan Baba, insists he is ‘absolutely fit and comfortable with [his] weight’. Khan claims that his massive weight – nearly have a tonne – hasn’t caused him any health problems so far. “I don’t have any disease nor do I feel uncomfortable with my weight,” he said. Speaking about the challenges he encounters in daily life, Khan Baba said the only problem he faces is getting in and out of cars. “I experience problems while travelling in cars owing to space constraints,” said Khan, who owns a big SUV.

The self-proclaimed Pakistani Hulk started gaining weight when he turned 18, and he has been growing ever since. Instead of worrying about his growing weight, he decided to bulk up even more and decided to get into weightlifting and strongman championships.

Khan Baba is a descended of a rich family who provided him all the means of comfort. Khan says he grew up watching WWE wrestlers on TV and dreamed of one day being as strong as his idols.

He is known for his sense of humor and trying out his muscle force on his companion and friends, which resulted in their injuries. Khan was often subjected to embarrassing situations because of his figure.

Khan recalls some awkward souvenirs he lived as a child, saying, “One time, my father gave me a vehicle, and once I sat on the back seat, the rear axle broke, I was too shy, but my father laughed and took it lightly.”

Khan said there was no culture of weightlifting in Pakistan, but he hopes to change that by inspiring others with his stunts. He expressed hope of representing Pakistan in World Weightlifting Championships with the support of the government.

“My immediate goal is to enter World Wresting Entertainment (WWE) competitions. I am looking to meet weight targets and I am consulting doctors to keep nutrition going.” 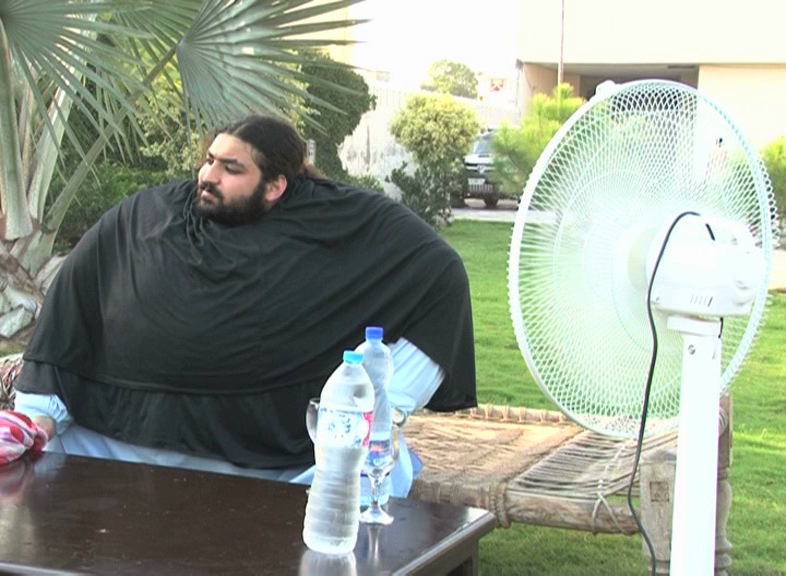 Khan Baba is somewhat of a local celebrity in his neighborhood, with hundreds of people regularly turning up at his house to take photos with him. He claims to be the world’s strongest man, around Pakistan. “I get a lot of love and admiration from the people here. But I don’t want to stop here. I want to become a world star,” he said.

However, this fame isn’t enough for him and he now wants to find himself a wife.

“My parents want me to get married. They want to have grandkids but I haven’t found the right match for myself. In the last seven years, I have been desperately looking for love, and have seen 200-300 girls, but they were all an average weight.

I need a heavyweight wife so I do not hurt her. All the women who have wanted to marry me so far have been too skinny.

I am 6ft 6in tall and weigh almost a tonne so it is not possible to look [like] a normal couple with an average woman. It’s very important to me that we look right.”

Hopefully Khan Baba will be lucky in his quest to find the perfect life partner and can continue with his weightlifting journey.