In between the older part of Peshawar, the city of flowers, lies “Qissa Khwani Bazar” — which is said to be not only oldest market of Peshawar city but of the entire Indian subcontinent; having popularity even before partition of India in 1947.

Now merely a physical structure in Peshawar, the market was once pre-partition India’s busiest commercial hubs and it attracted travelling merchants of all ethnicities. These traders would stop at Qissa Khwani and gather in local tea houses where they would exchange stories of their experiences. This practice elevated Qissa Khwani from a simple marketplace into a living, breathing celebration of the tradition of storytelling itself.

There is such romance associated with the very concept of Qissa Khawani Bazar — translated literally, it means the story-tellers bazar — that one conjures up images in one’s mind of old people huddled together and sharing tales of yore over hot tea. That is undoubtedly how the bazaar did get its name and how one would have found it many generations ago, but alas no more.

Now a busy market place with narrow streets, it is divided into different sections where one can purchase dry fruits, tea, spices and other accessories. The market is better known for several food streets and a tea shop which is said to be hundred years old can be also in the vicinity.

Among these streets is the Bazaar-e-Misgaran, a street beginning where the Qisakhwani ends.

While Qissakhwani was the favourite haunt of trans-Afghanistan traders sojourning in Peshawar before moving on to the Indian subcontinent, the warren of streets fanning out of the storytellers’ bazaar was equally significant in their scheme of things. These streets specialized in merchandize that were the staple of Silk Road trade – silk, spices, copper, silver, iron, dry fruit etc. In time, the streets came to be known after the wares they crafted and specialized in.

In Peshawar a big market is allocated for antiques and traditional handicrafts, known as, “Misgaran Bazaar,” which means, bazaar of brass workers. Established long before the Partition of India, the bazaar in good times had dozens of shops that dealt in sale, manufacture and repair of copper and brass products.

Shops in this bazar, home to a number of families who migrated from parts of India, offer traditional craft services like coating, polishing and enamelling brass and silver. A small factory and several craft shops can be found here that crafts utensils, cutlery, decoration items and souvenirs from different metals like copper, silver and brass.

Brass is said to be more famed across the city and had its popularity since the opening of the small factory in Qissa Khwani Bazar that manufactures such majestic metallic items since 1948 — year after Pakistan rised as a soveirgn nation. 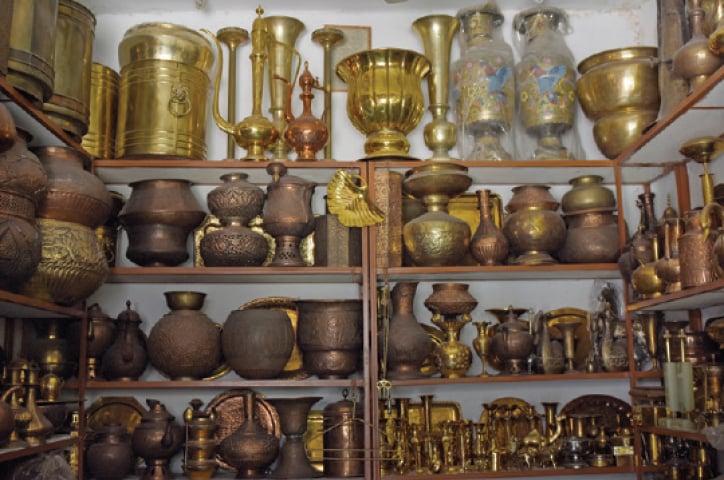 Polished and unpolished brass items on display at a shop in Bhabra Bazaar. — Credits: Dawn.com

The local factories have been crafting antiques such as pandan, vases, candleholders, lanterns, jugs, glasses, award shields and other souvenirs from bass since ages. They make decorative plates, vases, bowls and similar other things in exquisite designs reminiscent of the great Mughal period.

These include small pots, utensils like “daigh” which are used for cooking on special occasions such as weddings or funerals, decoration items, water storing utensils, spoons, cutlery items and similar crafted things.

In Peshawar, brass work is done on many things like household utensils of daily use to decoration pieces.

Products of polished brass have their own appeal but it is the engraved work in colourful and artistic patterns that is most prized.

These things were a part of the local culture of Peshawar at large because people would use such items in their households on a daily basis. People of Peshawar give household utensils to their daughters in “dowry,” that are made of brass and are beautifully carved. These include water storage and cooking utensils.

Unfortunately, the art of brassware is at the verge of being vanished

The demand for brass, silver and copper items were once so high that even people from other areas across the country and abroad would pay the city a visit to buy the local antiques made of metal. Its popularity attracted famous people like former US president Nelson Rockefeller, Princess of Thailand, King of Iran and the King of Libya Muammar Qaddafi and several Hollywood actors who visited the shops where all these items and utensils are manufactured.

The introduction of stainless steel utensils also caused a major decrease in the use of the brass and copper utensils. Because these metallic utensils need metal coating and other electrolytic processes so to become corrosion-free, it becomes relatively expensive for people with normal and moderate financial background.

Another reason why the crafting of brassware utensils and cutlery is at the verge of being vanished is the higher rates of brass which have been sold in 600-700 Pakistani rupees per kg. The design and metal art on these items also require special equipment that which is pretty expensive.

The hike in price of metals specially Brass was caused due to poverty and inflation after the Soviet-Afghan war in 1979. Pakistan’s “war on terror” also caused a major decline in the trade of these items and with coming new trends and cost-effective alternatives, the popularity of brassware faded with time.

“Most people no longer buy brass utensils for cooking and serving food because the maintenance is very cumbersome.” says Abdul Hameed, a shopkeeper from Peshawar. “Brass kitchenware must be coated with tin every two months otherwise, food cooked in them becomes toxic. Today, brass items are mostly used for decoration.”

He added, “But stainless steel pots are only good for boiling water or milk. Nothing compares to food cooked in a large brass or silver daig (pot)”.

An ancient town falling along the Silk Road trade route, one can still spot ghosts of Peshawar’s old grandeur in decrepit caravanserais where travelers, traders and spies once sipped green tea as they shared tales of travels and intrigues. The old city streets traders engaging in commerce and story-telling as they cooled their heels gave Peshawar its fabled Qissakhawani bazaar – the street of storytellers.

Student of BS Peace and Conflict Studies at NDU, Islamabad.