One year ago, people got woke—or so the story goes. The #metoo movement was introduced and a large number of women started speaking up against sexual abusers. The movement aims to enable women (I should say this should include everyone and not just women) to speak out about sexual harassment, domestic abuse, or intimidation.

In Pakistan, major public figures and celebrities were targeted and defamed using the #metoo moment on social media among which only a few could be proven to be genuine. Numerous of the accusations made failed due to lack of evidence as well as some turned out to be false and a ‘tool to defame’  or exact revenge or or just be plain mean.

Ukhano under fire with multiple harassment accusations against him

Among the many men who faced the allegation was Pukhtun influencer and vlogger Ukhano – Umar Khan who was accused of sexual harassment by multiple women in July 2019.

The controversy links back to a now-deleted Facebook post that mentioned that Umar had the tendency to misuse his power of influence. The post made its way to Twitter and instantly started picking up heat as more and more voices came forward claiming they have faced the same at the hands of the 28-year-old vlogger.

Ukhano got exposed wth, shoutout to girls who came forward. he tried to rape one of them.. pic.twitter.com/J09PM1TmDP

One woman also came forward and stated that Umar Khan attempted to rape her.

Among the accusers was a girl named Dua Asif (alias Afrah Asif) who, in the comment section of a Facebook post, claimed that Ukhano attempted to rape her. She further added that Khan allegedly degraded her but she couldn’t speak up against him because he is a famous and powerful influencer and thought that if she made her claims, no one would believe her. 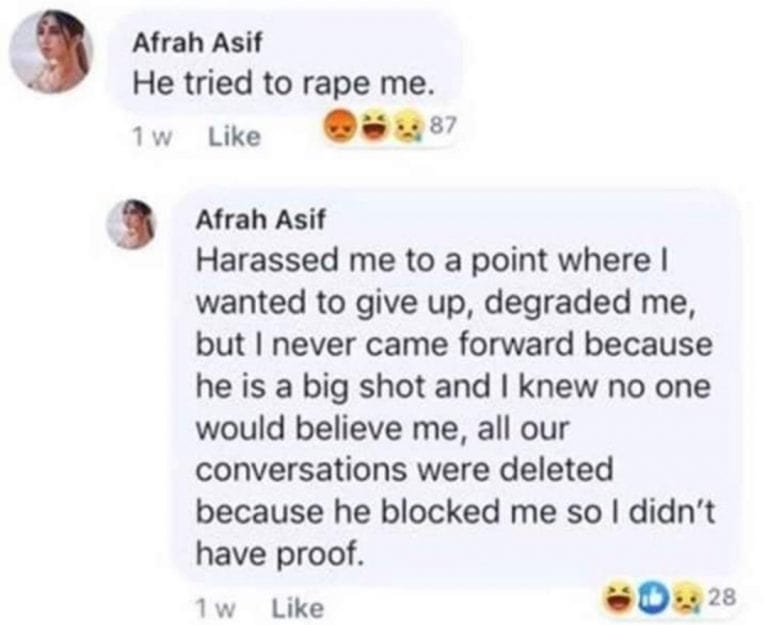 The vlogger recently filed an FIR against Afrah Asif on grounds of a false allegations, false information and a defamatory campaign against him. He also took to Twitter and posed a copy of his FIR.

Never make negative comments or spread rumors about anyone. It depreciates their reputation and yours. #UkhanoFalselyAccused #FIR #CYBERCRIME pic.twitter.com/LGjpwVZ2B3

10 days after Ukhano’s FIR, Afrah claimed her account was hacked and it wasn’t her who made those allegations

Afrah Asif, on Tuesday, backtracked from her allegations saying she has nothing to do with the comments made under her name since her account was hacked. From what we understand from her statement is that both of them have now reached mutual grounds in regards to the entire situation.

However, what we are still puzzled given the fact that if her Facebook was really hacked as she claims, kept her from talking about it when the news of harassment against him went viral?

People also had mix thoughts about the backtrack

I don’t understand how easy he give up on such stupid statement of afrah like my account was hacked. tell me your mouth too hacked? why you shut your mouth until law knock you door. @u_khano i am disappointed #ukhanofalselyaccused

So Ukhano was falsely accused? Dude Idk what to believe anymore

Seemed like a publicity stunt anyway. No one was even mentioning Ukhano so they had to cause some stir.

So basically there was a controversy against UKhano that was very hot news in the past months but now everything has come in favour of Ukhan all the girl cards were played against him only to destroy his career.#UkhanoFalselyaccused

So it was a controversy against YouTuber that was trending topic in the past months but now it seems that everything has come in favour of Ukhano. #UkhanoFalselyaccused

After being accused of harassment, UKHANO took the legal route against the false allegations. Following this, Afrah Asif – the girl who accused him – denied her statement claiming her account was hacked.#UkhanoFalselyAccused

However, some people are still not convinced of his innocence given that Afrah’s claims weren’t the only ones

Can’t help but think that Afrah’s statement is forced esp since MULTIPLE women came forward to give allegations against Ukhano. Nonetheless, I pray to God that she is safe because the people of this nation are about to eat her alive.

Wow. Fuck Ukhano regardless. People so conveniently forget that MULTIPLE women came forward. Everyone saw your fucking lulli bro, what the fuck.

The #metoo movement in Pakistan is seemingly going a bit out of hand. With the growing number of false allegations, the movement is gradually losing its charm.

One big flaw of the movement is the tendency to adopt the idea of “believe the victim.” What should be the position is “respect the victim.” Let me say that again. “Respect the victim.” There is absolutely no reason to blame the victim in these cases or to disregard the accusations offhand. They deserve serious consideration and evaluation.

These sorts of accusations should be taken very seriously, but the action taken on them should be based on evidence, not on the accusation